If you’re like me, you’ve probably saved all of episodes the fifth season of Shameless on your DVR or watch them OnDemand. We all know what happened but here’s a recap:

In season five of Shameless, the Gallaghers are feeling the heat! In the swelter of another Chicago summer, Fiona (Rossum) juggles a crush on her new boss (Dermot Mulroney) with a new husband (Steve Kazee) and the return of her old boyfriend (Justin Chatwin)! Frank (Macy) balances his brand new liver against that old healthy appetite for liquor, drugs and trouble. Lip (Jeremy Allen White) heads home from college and struggles to hang with his old South Side friends. Debbie (Emma Kenney) has her first real boyfriend, Ian’s (Cameron Monaghan) dealing with real health issues, and Carl’s (Ethan Cutkosky) just dealing. Personal and urban renewal runs rampant as organic coffee shops and yoga studios invade the hood, and the Gallaghers stumble toward finding out who they really are and who to truly love.

What’s not on my DVR or OnDemand are all the extras only available on the DVD/Blu-Ray copies.  Here’s what we have to look forward to: 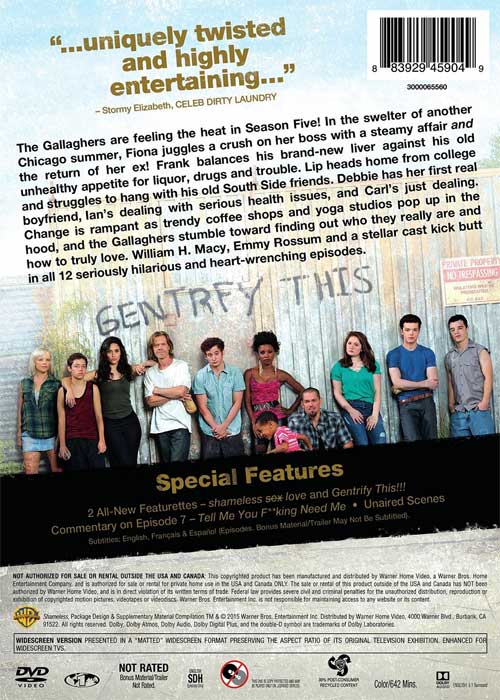 Not sure where to order your copy? Try Amazon, Best Buy, Target, or Walmart.  Don’t forget to let us know which of the extras are your favorite(s).

Check us out on Twitter or Facebook for exciting events leading up to the premiere of season six on January 10th, only on Showtime.

0 comments on “Shameless: The Complete Fifth Season on DVD & Blu-Ray”